Raising the voice of the unarmed majority 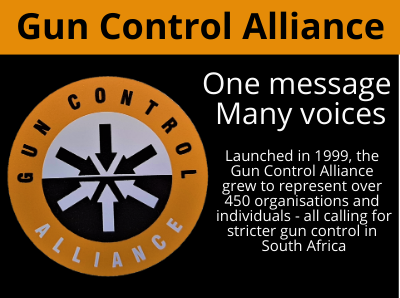 Gun Free SA began building a broad-based civil society alliance to strengthen gun control. The Gun Control Alliance (GCA), launched in 1999, grew to represent over 450 organisations, institutions and individuals representing business, health, human rights, religious, women and youth organisations.
The GCA had its origins in the Gun Control Charter, developed by GFSA as a tool to bridge the gap between policy makers and civil society. The Charter consisted of a list of minimum demands to be included in a new Firearms Control Act.
When the public was invited to comment on the Firearms Control Bill, the GCA mobilised its members and networks to make written submissions and to encourage public debate on the issue.
Two rounds of public hearings on the Firearms Control Bill were held in Cape Town – the first in June 2000 and the second in August of the same year.

MPs give Samuel Kobela from Mapela a standing ovation
Samuel Kobela from Mapela – a poor rural community in Limpopo Province made an oral submission to Parliament on the Firearms Control Bill. He reflects on the experience below:
“First, I would say, when I heard the news that I would be going to Cape Town to make an oral submission on the Firearms Control Bill, I got excited, nervous and proud. I got excited in the sense that it would be my first time to fly and also my first visit to Cape Town and to Parliament as well as to the sea. I got nervous when I thought of presenting before the MPs, and I felt proud at being invited by the Safety and Security Portfolio Committee. Adèle [Gun Free SA’s Director] and myself left at 16h15 to Joburg International Airport. On board the flight I was relaxed because I was sitting next to Adèle. We arrived in Cape Town at 20h00. We drove to Sea Point where we spent the night. Sea Point is next to the sea and really I had a clear view of the sea. In the evening, Adèle acted as the Portfolio Committee Chairperson and asked me to present. After my presentation, she asked me questions. She encouraged me – and this kind of practice really helped me. I went to bed at 23h00 and woke up at 5am. Before we drove to Parliament Claire (a Gun Free SA staff member) and myself walked on foot to the sea where she took pictures of me. We arrived at Parliament at 8h30. During the Public Hearings I listened carefully to presenters. Some of the presenters were furious, criticising the Bill as a whole. Nevertheless I realised how friendly the MPs were. When the Chairperson called my name, I felt nervous, but when I started talking I regained confidence. My presentation focussed on two issues: Gun Free Zones (GFZs) and the Age Limit. I supported chapter 20 (of the Bill) on GFZs. GFZs are about community safety and the initiative has been going on for three years in Mapela and is getting support from more residents. I also objected to the age limit of 18 (in the Bill) and proposed the age should go to 25. This will exclude school going kids and will also make the implementation of GFZs in schools easier. After my presentation, the MPs applauded me for the work I’ve been doing.”

Gun Free SA’s work during this period is regarded as an example of effective public policy advocacy as was confirmed in an independent evaluation by a funder: According to stakeholders, including alliance members, state department officials and MPs, the GCA significantly contributed to the campaign for stricter gun control.

Sign up to our email newsletter for the latest news, updates and insight into gun control efforts.

STEPS TO REMOVING A GUN FROM THE HOME
#16Days #EndGBV #stopgunviolence

If someone you know has a gun and they are misusing it, or are a danger to themselves and others, you can ask the police to remove the gun.