The Gun Free Zone project (GFZ) project is an important tool used by Gun Free SA to create safe spaces and encourage debate about individual and community safety.
As a result of our work with communities, the Firearms Control Act (2000) makes provision for the establishment of Firearm Free Zones (FFZs). Click here for more information on how to leave your fear at the door and make your space a GFZ.
Click here for more information on the differences between GFZs and FFZs.
Much of Gun Free SA’s GFZ work has been included in a United Nations guideline document. Click here to download the Office of Disarmament Affairs Guidelines on how to establish and maintain gun-free zones. 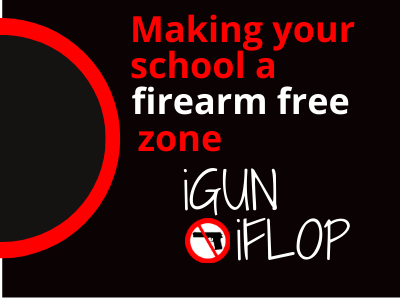 Recognising that violence at schools is a major problem, the South African Police Service (SAPS) put out a tender in February 2000 for a pilot project to develop, implement and maintain schools as FFZs under Section 140 of the Firearms Control Act.
Gun Free SA applied for and was awarded the SAPS tender because of our experience in developing tools and materials in helping communities and organisations create safer communities.
In total 27 schools across SA participated in the FFZ pilot project, which was called iguniflop. An independent evaluation of the pilot found that participants overwhelmingly (70%) believed that they were safer after their school became a gun free zone.
While all 27 schools in the pilot adopted GFZ policies and applied to the Minister of Police to be declared as Firearm Free Zones under Section 140 of the Firearms Control Act, to date the Minister has yet to declare any space a Firearm Free Zone.

Further, in both rural and urban areas where crime and gangsterism prevail, youth strongly supported their school becoming gun free; the process itself created the space to engage youth around the issue of guns and gun violence, giving them the opportunity and power to directly influence their immediate environment and develop alternative responses to violence.

Sign up to our email newsletter for the latest news, updates and insight into gun control efforts.

What is Gun Free SA?
Learn more at our website, http://gfsa.org.za

As the Western Cape sees a rise in the distribution of illegal firearms, Adele Kirsten, Director of @GunFreeSA, says the solution is for @SAPoliceService to reduce the number of illegal guns on the streets and to strengthen the law. https://www.iol.co.za/weekend-argus/news/corrupt-police-officers-keeping-illegal-gun-trade-going-22c44a54-ffc8-4cd7-9424-963b05521488